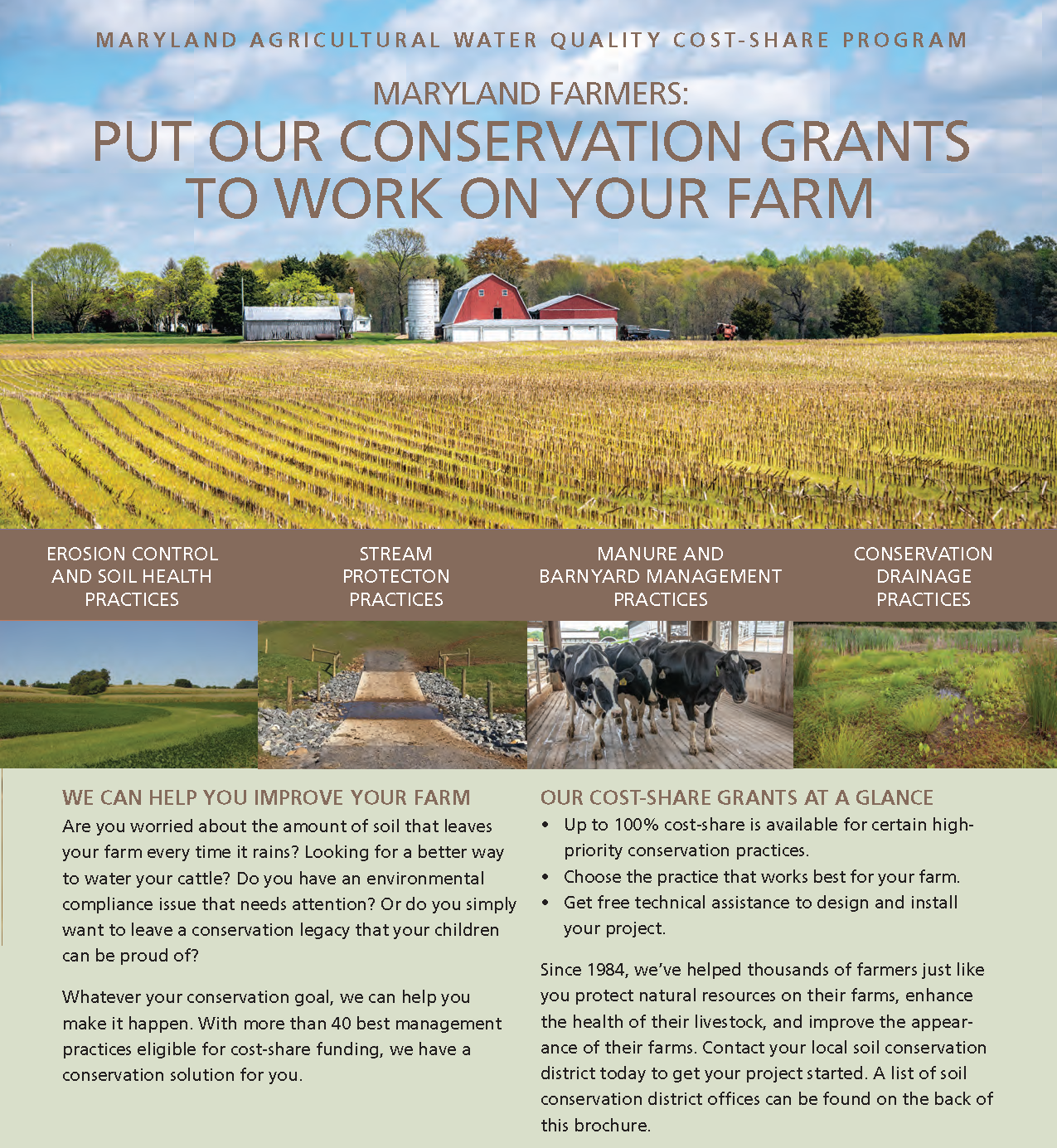 The Maryland Department of Agriculture (MDA) is a state agency of Maryland that was established in 1972; according to the MDA, the agency’s mission is “to provide leadership and support to agriculture and the citizens of Maryland by conducting regulatory, service, and educational activities that assure consumer confidence, protect the environment, and promote agriculture.” Along with other federal, state, and district agencies and organizations, MDA helps to staff Soil Conservation Districts across the state; each county has its own district to assist farmers, landowners and others in solving natural resources problems.

According to Jenny Lee Freebery, MDA Conservation Planner with the Kent Soil and Water Conservation District who works specifically with the Maryland’s Conservation Buffer Initiative, “these [soil district] organizations started during the dust bowl, when people realized how important soil conservation was and how we needed local boots on the ground efforts; now, pretty much every county, parish, or jurisdiction in the United States has their own soil conservation district.” In conjunction with the various Soil Conservation Districts and the agencies that staff them, MDA is able to offer a variety of programs and services for farmers and landowners on Maryland’s Eastern Shore, ranging from technical assistance to cost-share assistance. Examples of the technical assistance provided include surveying properties in order to design various projects, putting in buffers, finding ways to reduce erosion, implementing practices to improve soil health, and adding wildlife habitat to properties. Freebery noted that Planners are able to assist with cost-share to help implement practices: “some of the practices get prohibitively expensive, especially because we know that farmers can have some very tight margins and you have to watch the bottom line, so we actually have grants that offer cost-share,” with some grants covering up to 100% of project costs. 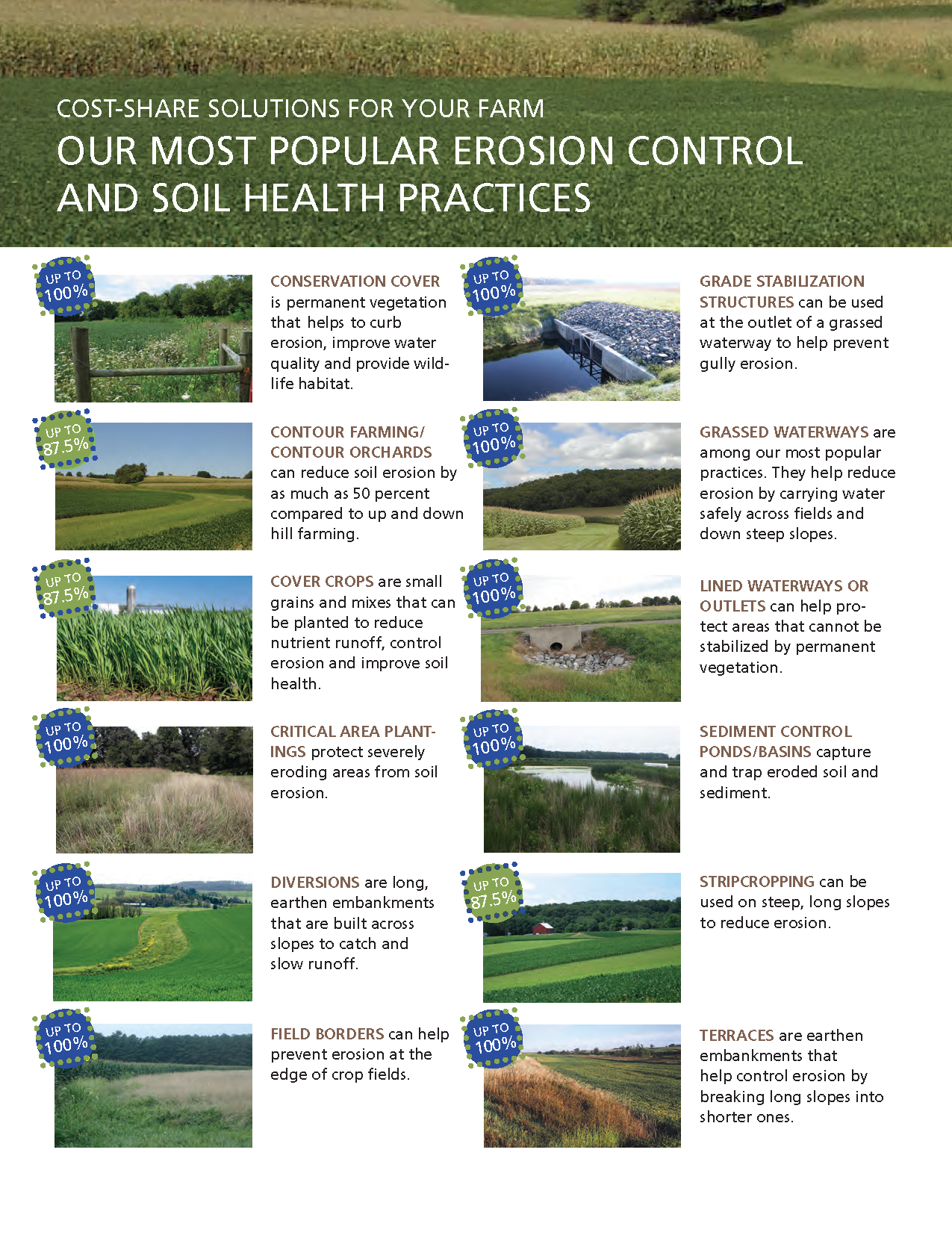 In working with MDA Conservation Planners, Freebery notes that landowners are able to take the lead on projects and are ultimately the decision-makers in projects, while MDA staff will help take care of the technical and financial legwork. “For example, if it’s putting in a riparian buffer of grasses, we’ll help them figure out how wide it’s going to work for their operation, what type of grasses will meet their needs, whether it be wildlife, water quality, or a combination of the both,” said Freebery. “We work with them to get the cost-share and then they’ll find their own contractor; we can give them a list of ones who we’ve worked with, but they’ll pick who they want to do the work. Then we’ll help with the whole process of cost-share, do the paperwork side and they’ll sign it and we’ll submit it together.”

However, Freebery noted that the MDA Conservation Buffer Initiative is somewhat more restrictive than other programs or initiatives are: “the Buffer Initiative specifically doesn’t allow coupling [with other programs or organizations] on it and part of the reason why is because it’s got its own parameters and its own attractiveness to a slightly different clientele than something like a CREP (Conservation Reserve Enhancement Program) would.” Additionally, the Conservation Buffer Initiative aims specifically to repair forest or grass buffers in order to “get as much land that is adjacent to bodies of water into permanent coverage,” said Freebery.

Another program that assists with obtaining cost-share is the Maryland Agricultural Cost-Share program (MACS), which is available from Garrett County to Somerset County. According to Shawn Smith, District Manager of the MDA with the Talbot Soil Conservation District, MACS is “currently working on a lot of grass buffers, riparian forest buffers, wetland restoration projects, and conservation drainage, in addition to starting to grow [its] network of small livestock producers.” Where the MDA Buffer Initiative is only able to accept applications for projects in a specific window of time (from mid-January to mid-February), the MASCS program is able to accept applications year-round and can take on projects without ranking them first. “If someone’s really interested, we start talking with them about taking a look at the farm and we try to talk conceptually on what their goals are for the property and what they want to see for the property in 10 years, since most of our practices do have a maintenance life of 10, if not 15 years,” said Smith. “We’re going to have that conversation about what they’d like to do and then we have another conversation, sometimes jointly or sometimes separate, with the farmer just to make sure what we’re advising to the landowner makes sense and everyone is on the same page.”

With the Buffer Initiative and MACS drawing from different funding sources and using different application processes, it’s important to note that timing is still critical when applying for assistance from MACS. When applying for MACS, applications start locally, with an MDA Planner developing a cost estimate for the project, which is then reviewed with the landowner (and their farmer if the landowner isn’t also the operator on the property). 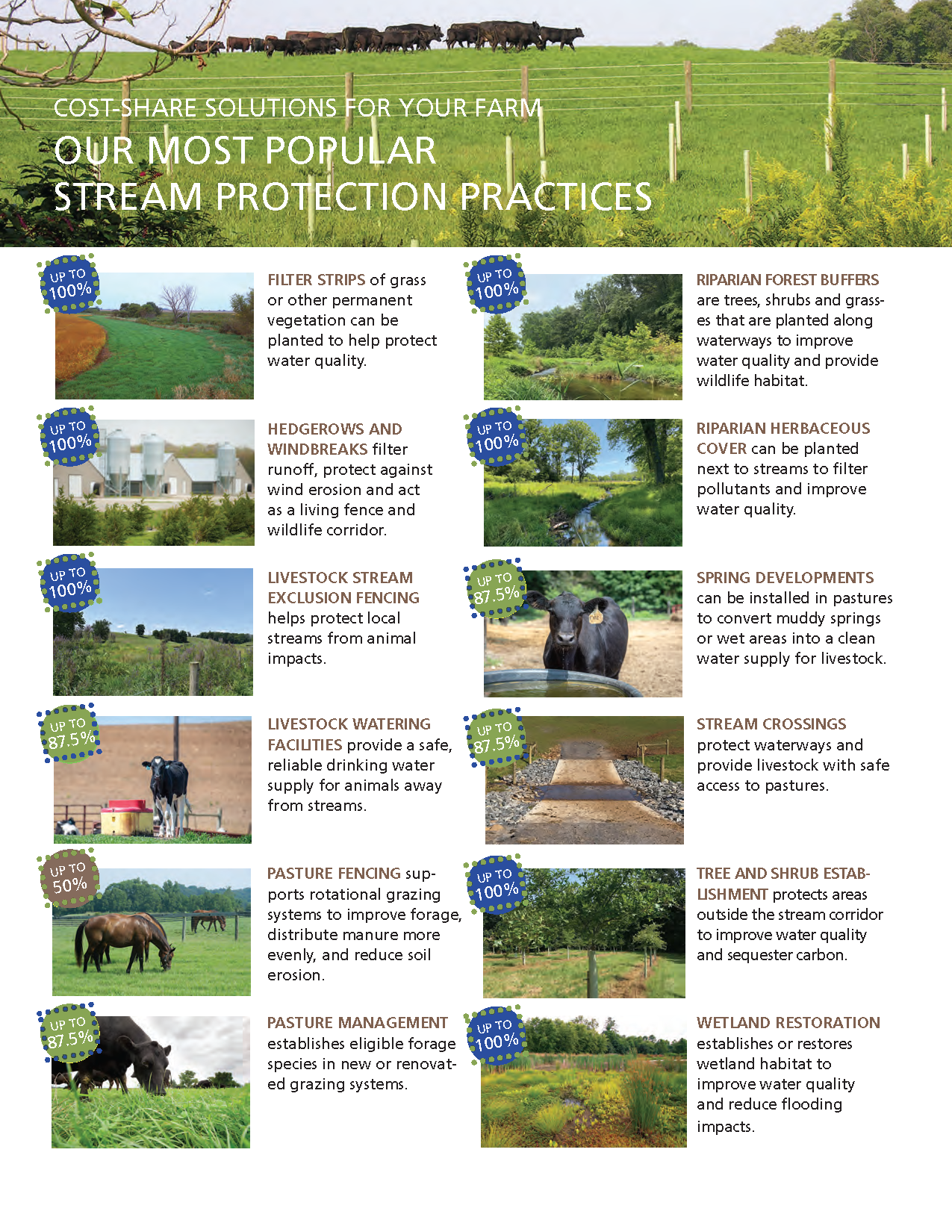 Projects that are considered an engineered practice require more time and resources as opposed to other projects, such as agronomic practices like cover crops and buffers. In addition to the time it will take to design and install a practice, the time of year also plays a significant role in determining when a practice can be implemented: “Initially we do try to think about if we’re going to do this project, what makes sense for the farmer and what a realistic timetable would be,” said Smith. “For wetlands, the perfect time around here is in the summertime to construct it because the soils freeze up twice a year on the Eastern Shore. Summertime makes a good time as any when it’s not as soupy and they can build it, but if someone came in [around springtime], realistically, we couldn’t get all of our ducks in a row for a summer project.”

In order to be eligible to participate in either of these initiatives, the property in question must have an agricultural history, be it crops or animals. “Some (but not all) of the programs do offer a higher rate if you have more animals,” said Freebery. “For example, if you’re putting in a manure storage building, we like to see at least 14 animal units, which an animal unit would be essentially like one cow, one horse, a certain number of chickens, a certain number of sheep or goats – it’s about a thousand pounds of animal.” Ultimately, MDA is trying to pursue projects of the greatest cost-effectiveness possible, but projects that don’t meet the cost effectiveness threshold can still be pursued at a prorated cost. “If farm only has 10 cows but still wants to put into manure storage structure, it’s still doing something good for the environment even if it’s not quite as cost-effective for us, so we’ll still give them the technical help and we’ll still give them slightly lower rate to help them with the cost,” said Freebery. Landowners must also have a current nutrient management plan. “This is just MDA’s way of saying ‘if we’re going to be giving you money, we want to make sure that you are following all these nutrient management regulations,’” said Freebery. “The plans are meant to work with the farmers to do soil testing, to figure out the right time, the right rate, the right place, the right type of manure or commercial fertilizer, whatever nutrients that they’re putting on to make sure that they’re doing the best conservation on their farms.”

Both of these programs offer economic benefits as well as environmental benefits. Cost-shares and grants allow practices to be implemented at a lower or even no cost to the landowner, and this in turn allows landowners to reap the environmental benefits. “For everything you’re seeing above ground, there is at least as much biomass underground, especially with things like warm season grasses and trees; so, you’re pulling carbon from the air and sequestering that into the soils and you’re building up soil organic matter,” said Freebery. “Also, when you have all of these wildlife species, you have the buffers in trees or grasses, you’re supporting the wildlife like quail, songbirds, rabbits, deer, all of that, but you’re also supporting the microbial communities underground to help improve soil health and that can also have a factor on your fields. Also, you’re creating habitat for beneficial insects too, so things that eat the insects that are going to be bothering your crop fields; for example, there are certain beetles that eat slugs and they like warm season grasses as one of their habitats.”

“One other advantage of this program on the economic side is that unlike CRP, if the landowner is thinking that in the next 5 or 10 years they might sell their farm, the MACS contract is a pretty easy one to carry over; however, you still run the risk of the next landowner deciding they don’t want it and then you’re on the hook to pay it back,” said Freebery. “But it’s not one where there’s a chance of ineligibility, whereas CRP unfortunately has an adjusted gross income cap, so you do run the risk of the person buying your farm not being eligible for the program. If you make over a certain amount a year, and that being said the number is really high but it does happen, then you wouldn’t be eligible to participate in the program.”

Following the installation of a practice through the MDA Cost-Share program, properties have a 10% chance of being randomly selected for spot-checks as directed from the MACS headquarters in Annapolis. “Our staff will go out to make sure that it’s still functioning as intended and it’s still meeting NRCS standards and specifications and doesn’t need any kind of repair,” said Smith. “That’ll probably be three times in a 10-year period that we will go out on a site.” Additionally, the state has recently hired Best Management Practices (BMP) Verifiers that are charged with ensuring that BMPs installed are still meeting their intended goals, design, or function. 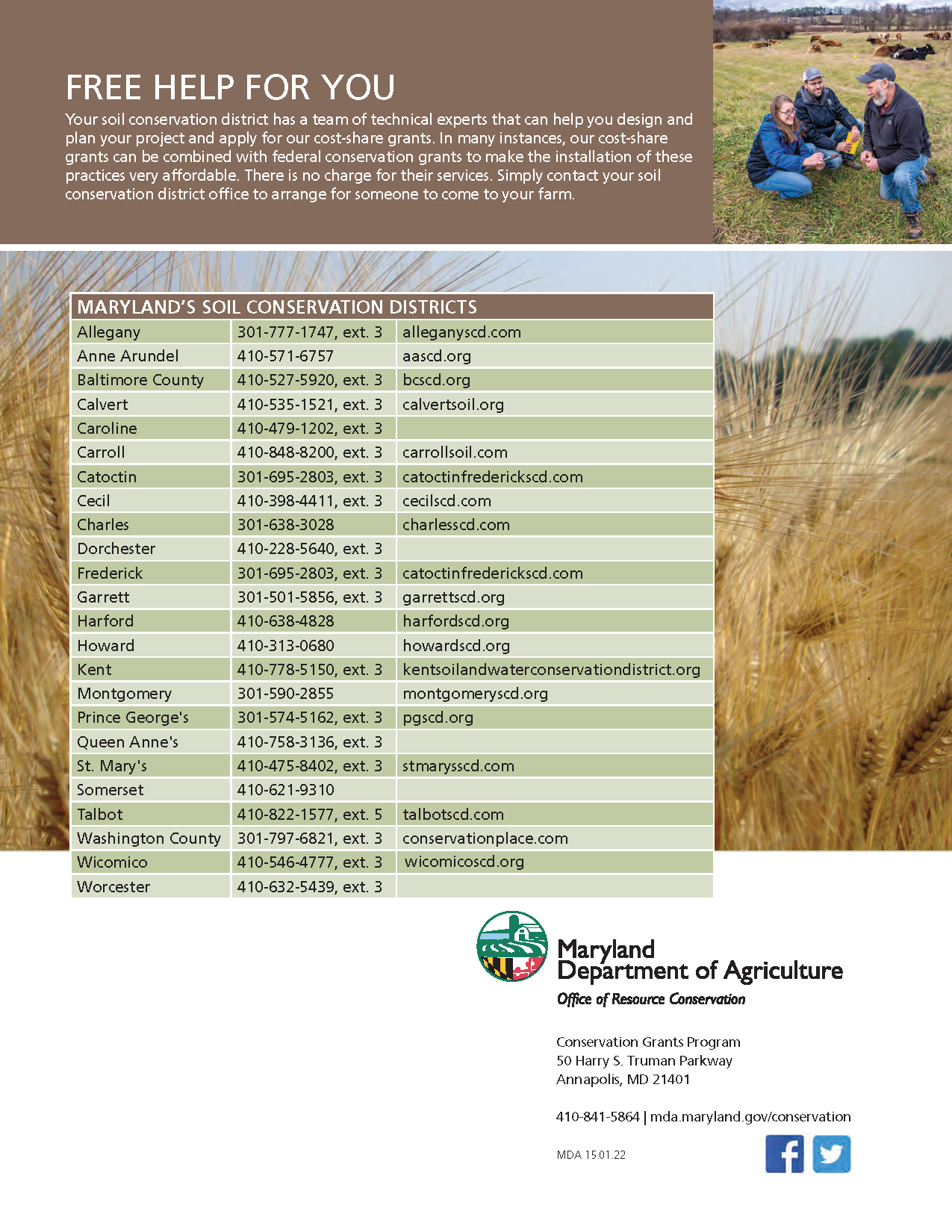 If you are interested in learning more about MDA or the Soil Conservation District, you can follow them on social media or visit either of their websites; each local Soil District has its own website and many have their own profiles on various social media platforms. Additionally, those who are interested in getting involved with soil conservation can become an Earth Team Volunteer with NRCS or consider supporting the Maryland Envirothon, a high school environmental education competition supported by the Soil Conservation Districts and MDA. Freebery described it as “a really fun program if you have any kind of skills in forestry, soils, aquatics, wildlife, or just an interest in helping out” and noted that “most counties have a team and could always use someone volunteering to help train the students and help them study.”