After receiving the award as the Horn Point Laboratory 2017 Chesapeake Champion on June 23rd, Jim Brighton’s prepared remarks told a remarkable story of family and connection to nature. If you were at the award ceremony, you will want to revisit it. If you were not there, you won’t want to miss this chance to hear his voice in a copy of his remarks.

“This is so cool! 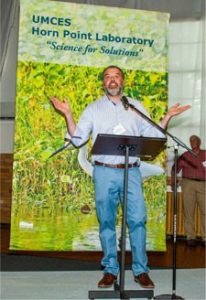 Thank you Dr. Roman and faculty of Horn Point for honoring me with this award.

Liz Freedlander, this is totally amazing! Thank you for all you have done to make this evening such a success!

Thanks also to Amy Haines, Richard Marks, and all the sponsors that have made this amazing event possible. There are too many people that I need to thank without whose help, inspiration and friendship I wouldn’t be here tonight. But a few people stand out that I would like to honor.

First off, if you haven’t met my parents and my sister you need to! They are the most kind, smart, and inspiring people that I know. Their love knows no bounds and they have supported me through all of my crazy wanderings and endeavors.

My wife Colleen. She is my backbone, my partner in all things.

Tommy and Susan Campbell. I have worked for the Campbell’s for almost 20 years. Their kindness and support has never waivered especially when I’ve needed it most.

And finally my partner at the Maryland Biodiversity Project, Bill Hubick. You could not ask for a more kind and energetic person to work with. His drive and knowledge is what really makes MBP work. He puts up with my rants, talks me down from the ledges I often find myself standing upon, and is a constant inspiration. Thank you brother! The next five years are going to be so awesome!

“I was lucky enough to have had the opportunity to spend most of my life with my two grandfathers. James Richardson, my mom’s dad, was a well known boat builder. My parents and my sister along with my grandparents lived in a small house outside of Cambridge along LeCompte Creek.

My sister and I would be dropped off by the school bus everyday at my grandfather’s boatyard. It was not unusual to see film crews from companies like PBS or one of the major networks interviewing my grandfather. People from faraway places would arrive un-announced at our house just to sit with my grandfather on the back porch. These folks were always welcome. They would listen to my grandfather tell stories late into the evening. It wasn’t until I was older that I would realize that these people had names like James Michener and Howard Chapelle.

My grandfather would take me on walks around the farm, along the river shore and in the woods. He would point out the beauty of a large beech tree or patterns caused by the waves etched in the sand. He liked to sit and watch the sun set over St. Anthony’s and if it was particularly spectacular he would request that the entire family come out and enjoy the vista, mostly in silence.

My dad’s father, the first Jim Brighton (there are lots of Jims in my family) was a Marine Corp Colonel and a naval aviator. He flew corsairs in the Pacific during WWII and flew AD-6’s along Mig Alley during the Korean conflict. What I didn’t realize until I was much older was that he flew communication jamming runs which meant he didn’t have any armament. Everyday he would fly up and down Mig Alley without any protection. After Korea he worked for the government, travelling through East Asia. When he retired he became the head test pilot for Boeing in Philadelphia where he tested every double-bladed Chinook helicopter that was made during the mid and late ’60’s.

After his second retirement he went back to school and got his masters degree in education. For a few years he was the boys’ dean at a private school in Iowa and then taught high school science at North Dorchester up till the late 1970’s. Grandfather Brighton also took me for walks in the woods. He took a more practical approach to nature walks than my grandfather Richardson. He would quiz me on what things were, what birds were singing or what animal had made tracks in the mud.

I was lucky. From these two members of the Greatest Generation I learned about aesthetic beauty and a practical understanding of that beauty.

My grandfather Brighton gave me my first bird book, the Golden Guide to North American Birds. At night I would sit in bed with my two favorite books, my field guide and my atlas. I would look at the range maps of exotic birds like Roseate Spoonbills and Scissor-tailed Flycatchers and then figure out in my atlas where exactly these amazing creatures lived and how I could get there.

When I was finally able to drive I was soon heading to those same places I had read about earlier in my life. One evening after returning from one of my trips my grandfather Richardson told me to come out on the porch and sit with him. We sat there together quietly and then he turned to me and said, “When are you going to realize that there are things to see right here. You need to go and walk the river shore and go to the woods.”

It wasn’t until many years later that I realized that my grandfather was right. There are amazing places right here in our own back yards.

When Bill and I started the Maryland Biodiversity Project one of our main goals was to create a community that revolved around the species that are found here in Maryland. We wanted to stimulate an emotional revitalization with the land and our immediate surroundings; to foster a sense of stewardship that would radiate across any barrier; to once again experience that sense of wonderment that we have all felt when we are surrounded by the unknown.

With this sense of stewardship comes good works. Like the people who have won this award before me, we must all claim our stake in the fight. It is not enough to say that our environment is important. We must act accordingly. Some of us will have bigger impacts than others but we must all accept the responsibility and act. Action is what will make the difference.

The great poet Wendell Berry said it best: ‘ I come into the peace of wild things who do not tax their lives with thoughts of grief…For a time I will rest in the grace of the world, and once again be free.‘