At Risk Teenagers and a Water Snake – A Memory from Wayne Gilchrest, SEEC Program Director

As we were walking through a patch of young forest on a deer trail filled with periodic spasms of multiflora rose sticker bushes and biting June flies, the “at risk” teenage students from Kent County High School, voiced their displeasure with screams and groans of “You can’t do this to us,” and “This is boring!”  Still we, the teacher and myself, continued walking, issuing words of encouragement and adding things like, “This is what it may have been like before the first humans walked this land, when there were still mastodons and caribou and bears, long before the Chesapeake Bay was formed,” and “You’re walking a trail like the ones the first Americans traveled, following their food source into this untouched wilderness.” 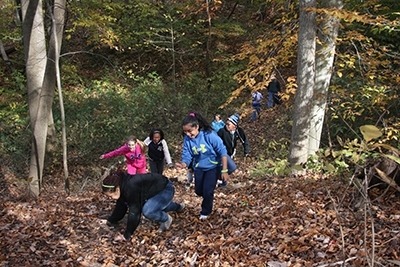 Then, as we approached the older forest of towering oaks and beech trees, with a forest floor shaded out by the thick canopy of leaves, thus mostly cleared of obstacles, you could feel an almost imperceptible modicum of attention from the students.

The demands of a confined classroom day after day, often cause attention fatigue in students.  This symptom is the result of a setting nearly vacant of natural stimuli and students’ individual insecurities in the classroom. A teacher’s often futile attempts at, “let me have your attention,” voiced repeatedly during the school day are replaced at SEEC (Sassafras Environmental Education Center) by the ancient rhythms of man’s evolving relationship with the wilderness.

At last we reach our destination.  A beaver dam.  I step down the slope to stand next to the lodge built into the bank at the edge of the beaver pond.  Ready to explain the ecosystem created by the beaver family, I suddenly see something move out of the corner of my eye at the top of the lodge.   One of my unvoiced fears is about to be realized!  The beaver is breaking out of the top of the lodge to attack the students.  This lasts a millisecond.  It is actually a huge, long, fat, water snake.  Leaving the warm glow of its sunny perch, streaking by students standing on the ledge, swooping down and across my firmly placed feet and into the murky mystery of the beaver pond, the water snake awoke in the teenagers an ancient natural response.  Run.  When I turned to look up, the students were gone.  Nowhere to be seen.

Eventually, everyone stopped screaming and laughing, and we reassembled on the bank to continue our discussion of the ecosystem services performed by the beaver and, an opportunistic addition, water snakes.  Two minutes later, a bald eagle flew into a nearby tree with a large fish.  We watched in awe at the primitive beauty of this natural spectacle.   The students fell silent for a time.   Then they began in quiet earnest to use their senses to look and feel what other natural wonders they might discover.   Attention fatigue was gone for the day, replaced by the adventure often found in the magic of nature’s design.   Learning had begun.  Wilderness can often be an antidote to insecurity, and an open door to profound and abiding satisfactions.

Next Post: Grab a tomato for the Food Fight!