From October 11th to October 14th, the Eastern Shore won’t just be the land of sails and oysters—it will be a sea of film! This long weekend is a celebration of storytelling and filmmaking including workshops, guest speakers, director Q&A’s, and jam-packed cinematic discovery.

Jim Bass, ESLC Coastal Resilience Specialist, will lead a discussion following the Maryland premiere of Current Revolution at the Chesapeake Bay Maritime Museum on October 13 during the Chesapeake Film Festival.

Current Revolution is the newest film by Roger Sorkin and the American Resilience Project. The film, and associated outreach campaigns, tackles the challenge of how various industries can help modernize the aging power grid to make it more secure, sustainable and responsive to the needs of its users.

The film, sponsored by Delmarva Power, encourages the use of renewable energy sources to generate electricity. The screening is the Maryland premiere for this essential and excellent film.

Current Revolution is paired with Tidewater, another eye-opening film by Sorkin that shows the ravages of climate change on the Hampton Roads area of Virginia, a region whose vulnerability to sea level rise affects military readiness and our overall national security. 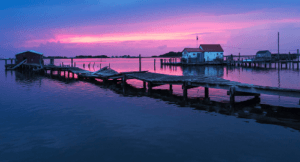 From the filmmaking team that brought us High Tide in Dorchester and Beautiful Swimmers! This is a film about a remarkable couple, Mary Ada and Dwight Marshall, whose lives on Smith Island personify Chesapeake Bay’s watermen, seafood harvesting culture and history. It’s also about the four children who chose to break with that tradition and why. Written by Tom Horton, the film – like his 1996 book, An Island out of Time – is both celebration and elegy for a place beset with rising sea levels, erosion, pollution, and harvest restrictions. Mary Ada’s and Dwight’s families have been on the island for centuries. Will they stay on their ancestral island or follow the example of their children and leave?

For tickets and more information about these environmentally-charged films, please visit chesapeakefilmfestival.com.