John Hutson, a leader in Maryland’s land preservation community who assisted in the protection of more than 43,000 acres throughout the state, died of cancer on Tuesday, November 22 in Franklin, Tennessee. 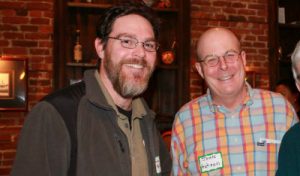 He began his career with the Maryland Department of Agriculture at the Charles County Soil Conservation District. In 1984 and transferred to the Maryland Environmental Trust in 1989.  Mr. Hutson was hired as an easement planner and was serving as the manager of the Easement Program manager when he retired in 2014. During that time, he worked with 265 families who voluntarily protected 43,500 acres of farms, forests and historic properties.  After retirement from the state, he worked with the Scenic Rivers Land Trust and the Land Preservation Trust assisting in the stewardship of their protected properties.

Mr. Hudson loved the land and the people he worked with throughout some of the most beautiful areas of the state.  His daughter, Erin Meold said “he loved walking the properties and taking photos.  He loved talking to all the different people involved and learning the farm history.  He taught me what it meant to really enjoy what you to do make a living”.

He was a friend and mentor to many entering the land preservation field, always exhibiting an exemplary spirit and dedication.  One of the many people he mentored is Jared Parks from the Eastern Shore Land Conservancy “He helped me cut my teeth in this field on some very interesting projects on the Eastern Shore.  They don’t make better people than John, or people with a bigger heart”.

Rob Etgen, director of the Eastern Shore Land Conservancy: “John was ESLC’s longest running easement partner from MET staff, a fast friend to all who worked with him, and a dear personal friend of mine. He was also the “Dad of the Year’ for Maryland once along with a number of less noteworthy but equally heartwarming accomplishments.  I always called John “the old shoe” because he fit so naturally and comfortably with whomever we paired him from the ESLC staff.”

Mr. Hudson was an avid outdoors man enjoying hiking and bike riding around the region. He enjoyed biking with his family and his extended bike family.  He loved birding, most recently recording the siting of an Indigo Bunting along a trail in Tennessee.

A memorial ceremony will be held in Maryland in the spring.

Next Post: Where to opt outside on the Shore