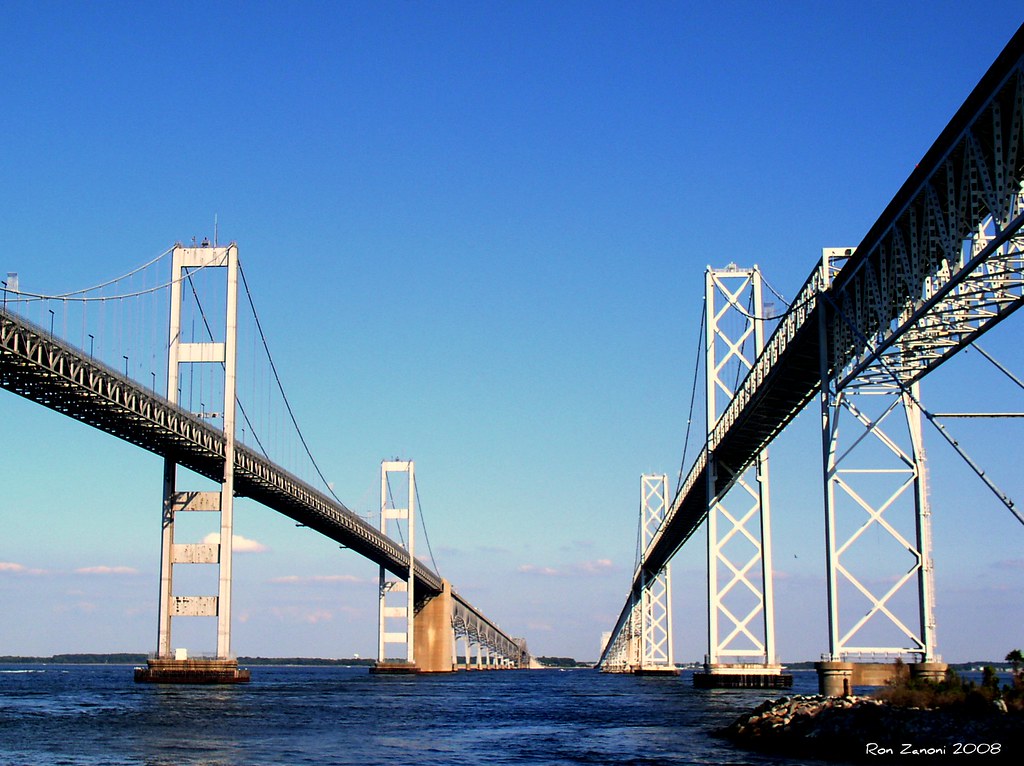 "Chesapeake Bay Bridge" by ronzzo1 is marked with CC BY-NC-ND 2.0.

The Bay Bridge is an iconic transportation landmark. We Marylanders put it on our license plates, hang framed photos of it on our walls, and find plenty of other places to use its recognizable silhouette. At ground level, however, the picture can be decidedly unpleasant: stuck in traffic, the bridge becomes less a landmark and more a frustrating liability, an essential artery that can spike your blood pressure.

And because of this traffic, the debate about a potential new bridge has waxed and waned for years. The conversation took a step forward last week, however, as state and federal highway officials released the final environmental impact statement (FEIS) for a possible new Bay crossing. As I have talked with folks around the area, many think this study means the decision to build a new bridge has been made and the time for review is over.  But the release of this first tier of environmental review is just the first phase of a two-phased process for a potential new crossing of the Chesapeake Bay; while the FEIS released last week stretches to nearly 600 pages, it is by no means exhaustive – that will come in the second tier, which is expected to cost $50 million (tier two analysis has not been funded or scheduled).

Just know that despite the word ‘final’ being in the title, this review is far from the final word and the process of a new bridge is closer to the beginning than the end. Much more analysis and review is legally required before construction can move forward, and a new bridge should not be considered a foregone conclusion.

What the just-published FEIS does, is eliminate all other corridor options other than the current Bay Bridge site. Any new bridge that might be built in the future will be tucked in close proximity to the existing bridges and utilize the existing approach corridors. You might remember news stories and social media posts from a few years ago showing a ladder of potential new bay crossing options going up and down the main stem of the Chesapeake. All of those other crossing sites are now off the table, and all things considered, that is a positive outcome: a completely new bridge site in Kent or Dorchester would have been an environmental catastrophe.

Even in the existing corridor, a new Bay Bridge will have a cascade of impacts that will surely threaten the future of a rural Eastern Shore. A new crossing will pour more thru-traffic into Easton and Cambridge, and will further increase flows on route 301. It would bring with it increased development pressure, farmland conversion, and because of a concept called ‘induced demand,’ it will likely lead to more traffic on the bridge itself.

Many questions remain, but by no means is a new bridge a done deal. ESLC will, as always, be a strong voice for the long-term protection of the rural character of our Eastern Shore and I hope your voice will join with us.