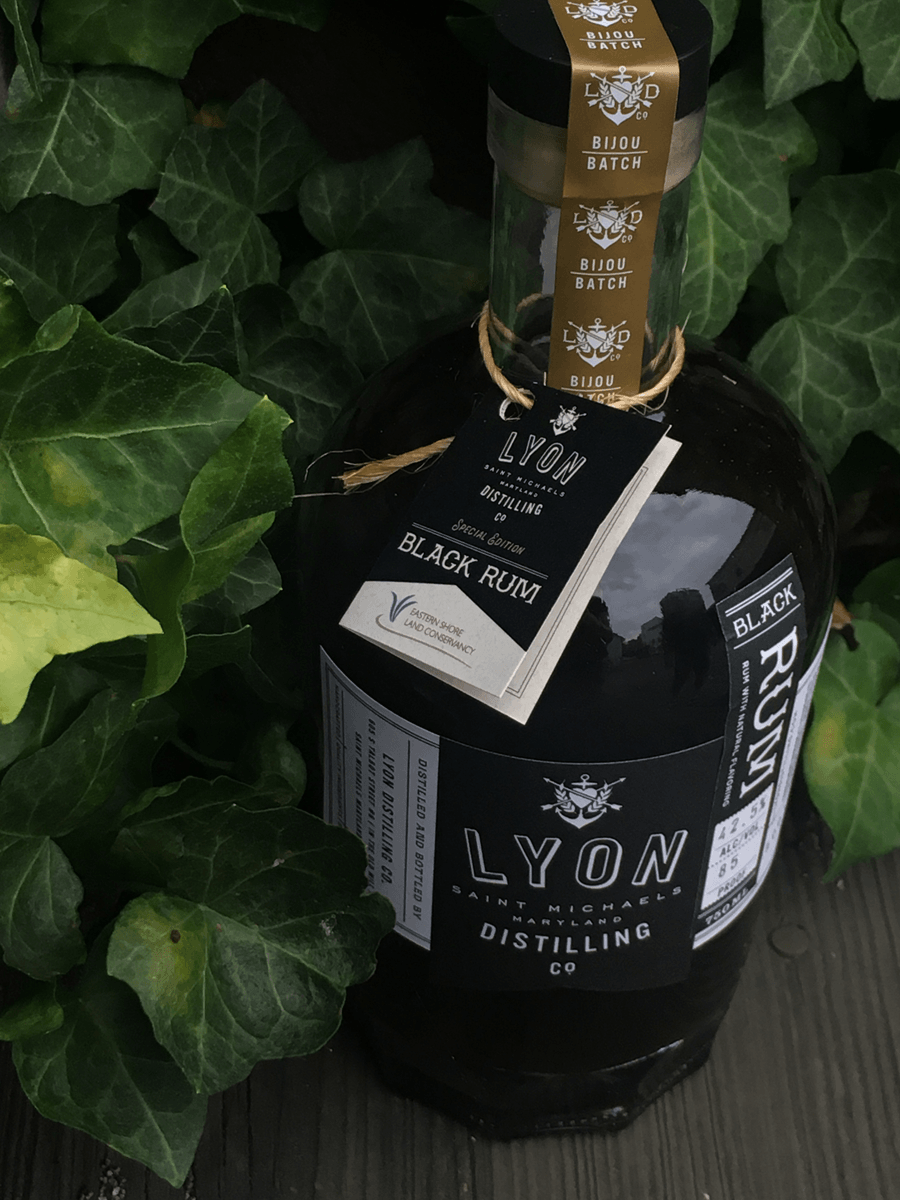 Three years ago, in January 2017, LYON RUM partnered with the Eastern Shore Land Conservancy (ESLC) to launch a special edition spirit – one that would celebrate the Eastern Shore heritage and coastal history, and honor and support an organization dedicated to protecting it. Designed to stand apart from other LYON rums, the Black Rum has a notably heavier oak influence, is slightly lower proof, and has a soft, vanilla, earthy richness. $5 from every bottle funds ESLC programs, and custom neck tags on each bottle identify the partnership and provide info on the organization and mission, stating:
Together we are committed to protecting the land on which we work and play, and we encourage you to sip this delicious spirit soundly knowing that a portion of your purchase helps fund ESLC’s many worthwhile endeavors.

Since 1990, the Eastern Shore Land Conservancy has helped preserve nearly 60,000 acres of prime land, along with promoting sound growth practices in rural towns and working to incorporate coastal resilience measures in preparation for sea level rise.

“I feel lucky and grateful to be able to call the Eastern Shore my home, and the home of my business,” says Jaime Windon, CEO & founder of LYON RUM. “The work that Eastern Shore Land Conservancy does to preserve and conserve the natural beauty of our environment is truly priceless, and supporting that was such a natural, great fit for us. I’ve always admired partnerships like this.”

A successful inaugural batch led to multiple, seasonal releases and developed into a three-year long project – resulting in a total of eight batches, 1400 bottles of rum, and thousands of dollars for the ESLC.

On Friday February 14, 2020 the last batch of LYON/ESLC Black Rum #008 will be released at the distillery. Less than 200, 750ml bottles are available (43% abv, $40). Additionally, Hair o’ the Dog Wine & Spirits and Town & Country, in Easton will have a limited number of bottles, as will The Wine Source in Baltimore.

“At LYON we believe that we get more by giving more, and launching the ESLC Black Rum project was our first foray into sustainable philanthropy,” a core value of the company, according to Windon. To date LYON has contributed over $7000 from sales of the Black Rum, and with the generous matching contributions of fellow donors those dollars were doubled, and even tripled at times – far exceeding any initial expectations, and resulting in more than $13000 for ESLC.

The LYON RUM team is proud to have created a remarkable rum that helped fund and support the work of such a great organization, and to have had the opportunity to educate customers on ESLC in the process. Although this marks the end of this project, the company looks forward to finding new ways to work together with ESLC in the future, as well as launch other such spirited partnerships.

“I never imagined we could have such an impact by simply doing what we do best – making & selling delicious rum,” says Windon, “and this is just the beginning.”

Next Post: This Is Why I Preserve: Alexander Walls