Caught up in the current effort to reform the federal tax code is a critical program that has completed nearly $25 million worth of rehabilitated historic buildings on Maryland’s Eastern Shore since 2002. The Federal Historic Tax Credit (HTC) is a 20% credit on the cost of rehabilitating a historic building and is a powerful and efficient tool for revitalizing our nation’s small towns and cities. 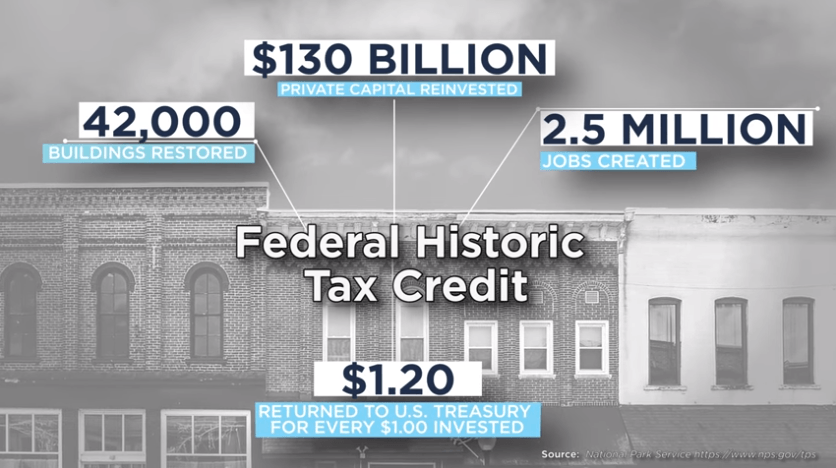 On Maryland’s Eastern Shore the program has a long history of revitalizing communities while also saving important historic buildings. Since 2002, in Easton alone the program has incentivized the rehabilitation of $10 million worth of buildings – from main street shops to former industrial buildings. A perfect example is the McCord Laundry facility, home to the Eastern Shore Conservation Center – a mixed-use campus of nonprofit organizations, businesses, and apartments. In Cambridge, the program is supporting the rebirth of Race Street, providing critical equity to make the rehabilitation of the Hearn Hardware Building a reality. The formerly vacant and crumbling building will now host market rate apartments and first floor retail space; yet another positive outcome thanks to the Historic Tax Credit.

Elsewhere in Cambridge, the Historic Tax Credit is incentivizing an ambitious and potentially catalytic project that will convert the vacant Phillips Packing Co.’s Factory F into a hub of commerce, industry, and education. Without the Historic Tax Credit and the New Market Tax Credit program, which is also seriously threatened, tackling difficult projects like this in rural communities would not be possible.

Repeal of the Historic Tax Credit should be of grave concern for anyone who cares about the future of the Eastern Shore’s charming small towns and cities. Reuse of historic buildings will plummet and investment in downtowns will become increasingly cost prohibitive. In turn, property values will sink and local coffers will suffer as property tax revenue plummets. New construction will move to the fringes of communities – resulting in more sprawl and the subsequent loss of farmland. Fortunately, this is a future we can avoid.

Organizations and municipalities all across the state and the Shore are calling on Congress to save the Historic Tax Credit. It’s also a rare opportunity for bipartisan agreement – it was a favorite program of President Ronald Reagan and has been championed by Republican and Democratic leaders alike in this latest tax reform debate. Eastern Shore residents should reach out to Congressman Harris and let him know they support preservation of our historic properties and investment in our towns.

Katie Parks is the Director of Conservation at the Eastern Shore Land Conservancy, a land conservation and community development non-profit organization. Twitter: @EShoreLandC

Previous Post: A perfect day at the 2017 Party to Preserve